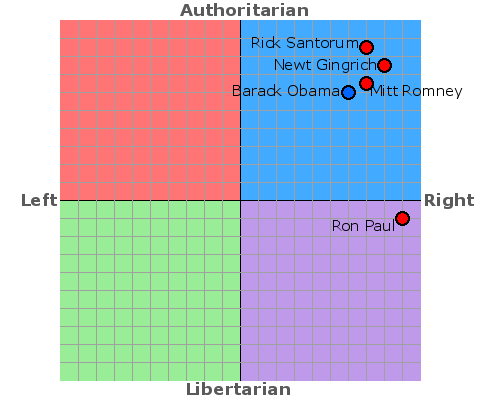 This is a US election that defies logic and brings the nation closer towards a one-party state masquerading as a two-party state.

The Democratic incumbent has surrounded himself with conservative advisors and key figures — many from previous administrations, and an unprecedented number from the Trilateral Commission. He also appointed a former Monsanto executive as Senior Advisor to the FDA. He has extended Bush tax cuts for the wealthy, presided over a spiralling rich-poor gap and sacrificed further American jobs with recent free trade deals. Trade union rights have also eroded under his watch. He has expanded Bush defence spending, droned civilians, failed to close Guantanamo, supported the NDAA which effectively legalises martial law, allowed drilling and adopted a soft-touch position towards the banks that is to the right of European Conservative leaders. Taking office during the financial meltdown, Obama appointed its principal architects to top economic positions. We list these because many of Obama’s detractors absurdly portray him as either a radical liberal or a socialist, while his apologists, equally absurdly, continue to view him as a well-intentioned progressive, tragically thwarted by overwhelming pressures. 2008’s yes-we-can chanters, dazzled by pigment rather than policy detail, forgot to ask can what? Between 1998 and the last election, Obama amassed $37.6million from the financial services industry, according to the Center for Responsive Politics. While 2008 presidential candidate Obama appeared to champion universal health care, his first choice for Secretary of Health was a man who had spent years lobbying on behalf of the pharmaceutical industry against that very concept. Hey! You don’t promise a successful pub, and then appoint the Salvation Army to run it. This time around, the honey-tongued President makes populist references to economic justice, while simultaneously appointing as his new Chief of Staff a former Citigroup executive concerned with hedge funds that bet on the housing market to collapse. Obama poses something of a challenge to The Political Compass, because he's a man of so few fixed principles.

As outrageous as it may appear, civil libertarians and human rights supporters would have actually fared better under a Republican administration. Had a Bush or McCain presidency permitted extrajudicial executions virtually anywhere in the world (www.amnesty.org/en/library/info/AMR51/047/2012/en), expanded drone strikes and introduced the NDAA, the Democratic Party would have howled from the rooftops. Senator Obama the Constitutional lawyer would have been one of the most vocal objectors. Under a Democratic administration however, these far-reaching developments have received scant opposition and a disgraceful absence of mainstream media coverage.

Democratic and, especially, some Republican candidates, will benefit massively from new legislation that permits them to receive unlimited and unaccountable funding. This means a significant shift of political power to the very moneyed interests that earlier elections tried to contain. Super PACs will inevitably reshape the system and undermine democracy. It would be naïve to suppose that a President Gingrich would feel no obligations towards his generous backer, Sheldon Adelson, one of the country's most influential men. Or a President Santorum towards billionaire mutual fund tycoon, Foster Freiss. (Santorum emerged as the most authoritarian candidate, not the least for his extreme stand against abortion and condom sales.) Or a President Paul, whose largest single donor, billionaire Peter Thiel, founded a controversial defence company contracting to the CIA and the FBI. Last year it was caught operating an illegal spy ring targeting opponents of the US Chamber of Commerce. In our opinion the successful GOP contender, Romney, despite his consistent contempt for the impoverished, was correctly described as the weather vane candidate. He shares another similarity with Obama. His corporate-friendly health care plan for Massachusetts was strikingly similar to the President's “compromise” package. The emergence of the Tea Party enables the 2012 GOP ticket of unprecedented economic extremity to present itself as middle-of-the road — between an ultra right movement with “some good ideas that might go a bit too far” and, on the other side, a dangerous “socialist” president.

The smaller non-Tea parties provide the only substantial electoral diversity — virtually unreported — in their Sisyphean struggle against the two mountainous conservative machines. Identity issues like gay marriage disguise the absence of fundamental differences and any real contrast of vision. Since FDR, the mainstream American “Left” has been much more concerned with the social rather than the economic scale. Identity politics; issues like peace, immigration, gay and women's rights, prayers in school have assumed far greater importance than matters like pensions and minimum wages that preoccupy their counterparts in other democracies. Hence the appeal of Ron Paul to many liberals, despite his far-right economics. Paul, unlike Romney, would have delivered a significant crossover vote from Democrats.

If Romney loses the election, it would hardly be devastating for mainstream Republicans. During a second term of Obama, they would no doubt continue to frame the debates.

We include our earlier General Election 2012 chart below. 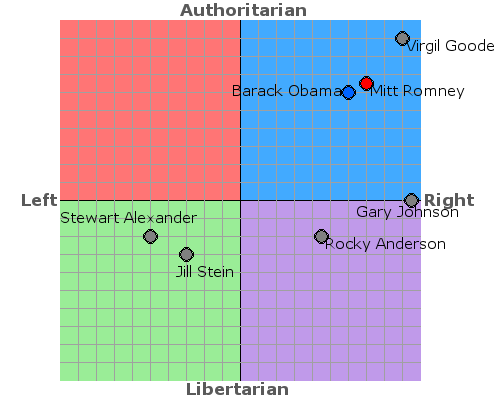