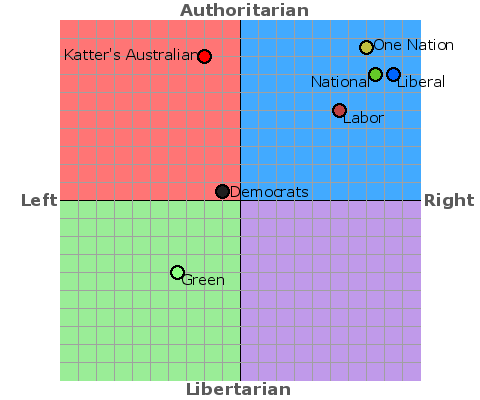 With most parties either reluctantly or enthusiastically embracing globalisation, the economic differences between Labor and the Liberals are increasingly blurred.

While the Rudd leadership is too new to assess, a tougher stand than his predecessor on immigration issues nudges his party closer to the Liberals on the social scale. On the other hand, we've also considered his declared acceptance of gay marriage. The Liberals, however, remain more socially conservative, putting them on a level peg with their rural twin. The National Party’s ambivalent position on rural subsidies places them a tad further to the left or — perhaps more accurately — a tad further from the right.

Pauline Hansen, true to form, wraps reactionary social policies with right wing economics together as naturally as fish and chips.

The Democrats, with their principled concerns for civil liberties and social justice, sit in a more moderate position.

It’s lonely out there for the rest. Katter’s Australian is an interesting mix of deeply conservative social views, with more than a whiff of old Labor’s economics — particularly concerning protectionism and asset sales.

The Greens also offer some of Labor’s discarded economic baggage, along with by far the most socially liberal policies. Most of those, however, have been marginalised in the media’s preoccupation with the party’s alternative stance on immigration.

Little is known of the WikiLeaks Party’s economic principles, and we’ve been unable to excavate much more than more mining from Palmers United. The Political Compass has therefore decided that it is not possible to accurately plot the position of those two parties.

Smaller parties may be added as the campaign continues.