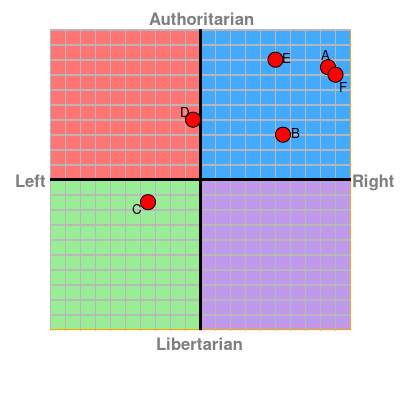 Like The Political Compass itself, the EU comprises a social dimension and an economic dimension.

Remain voters were themselves divided between:

Brexit voters were similarly divided between:

The attitudes of C and D, and also those of A and F, are similar; though because of contrasting degrees of feeling they resulted in a different vote.

Fundamentally, our social scale measures the extent to which diversity in social and cultural matters is a stimulus (libertarian) or a threat (authoritarian). These instincts inform our attitudes to all kinds of issue — from abstract art to sexual identity, foreign cultures, and crime and punishment. There is little doubt that the average Brexiter would show a less socially liberal score in our test. In the EU referendum, the social debate was largely about national identity, cultural diversity, sovereignty and, of course, migration.

The referendum also served as a vehicle for expressing discontent — or plain contempt — for the spiralling rich-poor gap, out-of-touch politicians and self-serving bureaucrats, and general anger among those alienated and left behind. Anti-Westminster sentiments were re-directed towards the EU which, after all, largely simply reflects the prevailing politics of its members. The referendum made more clear than ever the uneasy alliance of Labour voters — the marginalised and socially conservative in the northern regions, and the liberal centre-left élite in the metropolitan areas. While these two distinct categories might find little to disagree upon in economics, on the social scale the urban élite Labour voter is likely to have more in common with Lib Dems or the Tory “left”.

Although it went almost unnoticed, UKIP leader Nigel Farage’s extraordinary victory speech included reference to having ‘fought against multinationals and big merchant banks’. That, from a figure generally seen to be to the right of the Tories! This is the populist formula common to all of Europe’s other right wing ‘anti-establishment parties’ … picking up some of the discarded economic baggage of ideologically threadbare mainstream left parties, and wrapping them in the flag. It’s an appeal to those who are afraid, angry and left behind. It’s called national socialism. Without the constraints of Brussels, could the UK be moving towards its late Weimar phase? Certainly a classic prelude to authoritarian government is an enfeebled mainstream opposition.

Another thing to consider is that the demoralised Liberal Democrats might now have the perfect vehicle for a phoenix-like comeback. They’re the only major party unshackled by complex divisions over Europe and leadership resentments. The Lib Dems have few fixed principles, but they have held an unswerving attachment to the EU. The party wasted no time in announcing that they’ll campaign in the next election (perhaps sooner than expected) for EU re-entry. No need for another referendum. A vote for or against the Lib Dems would serve almost the same purpose.

As the Brexit process kicks in, the Lib Dems can be expected to pose an attractive option for some wet, socially liberal Conservative voters unhappy with Brexit, and maybe even an MP or two. Certainly the Blairite masses in the Parliamentary Labour party have more in common with the Lib Dems than with their own leadership — not to mention their own party members. If the Corbynites hold on, expect a haemorrhaging of MPs not to a new party but, more likely, to the Lib Dems. This in turn may lead to the Greens putting their lot in with an ideologically revitalised though representatively depleted Labour Party. But we’re getting way ahead of ourselves.

A daunting cloud will hang over the devastated political landscape for who knows how long? The Lib Dems are meanwhile uniquely placed to make hay while there’s no sunshine.