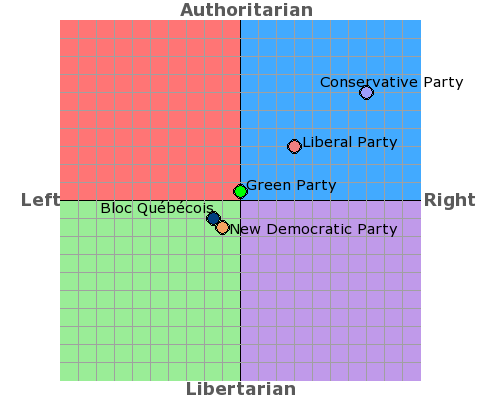 While the Liberals and the Conservatives accuse each other of reckless spending policies, their real differences are a little more significant on the social scale of The Political Compass. Ethical issues play well for the Liberals at the present time, while the Conservatives’ winning card is family values. Identity politics make for a more comfortable debate between parties of relatively little economic distinction. Both of the big two, after all, talk of lower taxes, jobs and growth.

Perhaps because Canada has emerged in better shape from the financial crisis than most other industrialised countries, the Canadian left has not enjoyed the reinvigoration of progressive parties in other democracies. The NDP has further lost its radical edge, sounding increasingly like one of the milder European Social Democratic parties; keen to be all things to more voters, perhaps presenting a safe pair of hands for coalition with the Liberals. The Greens, with their promises on labour rights and childcare, have moved slightly to the left, countering the otherwise rightward drift of the major national parties.

Bloc Québécois continues to pose difficulties for The Political Compass. The diversity of conflicting views within the party are transcended by its core cause.