(based on speeches, manifesto content and Parliamentary voting records) 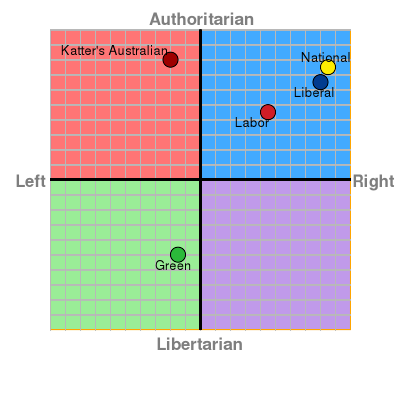 Australia has taken democracy to new heights. Everyone gets a go at being prime minister. Seriously, the rapid turnover of prime ministers during the past five years reflects volatile rises and declines of individual popularity more than any deep-seated policy differences within and between the major parties. Liberal Prime Minister Malcolm Turnbull has brought a difference of tone rather than substance to his leadership, offering a more polished and emollient style and upbeat view of the future than his combatant predecessor Tony Abbott. The Liberal-National coalition has kept the economy at the centre of the campaign, and, if given a further term, is likely to go still further in its embrace of neoliberalism.

Labor, like most social democratic parties in the west, has generally shifted to the right and is more comfortable taking principled stands on identity issues like gay marriage than, for example, the sovereignty-threatening and secretive Transpacific Partnership Agreement (TPPA), which, in reality, conflicts with every fundamental value of the party. Nevertheless, Labor has questioned certain aspects of the agreement and also attacked the banking industry — particularly since the revelations of the Panama Papers. Under Bill Shorten, Labor is also critical of the spiralling rich-poor gap, although it’s presented more as something that’s bad for economic growth rather than bad for those at the bottom.

Having re-opened the controversial detention centres in Nauru and on Manus Island in 2012, Labor is in a difficult position to go further than propose better conditions and regional resettlement. Green leader Richard Di Natale has called for their closure.

Issues like climate change have been left pretty much to the Greens, whose positions on the environment, human rights and social equality remain generally to the left of Labor.