With the exception of its Hong Kong region, China maintains strong economic controls, though fewer than those associated with a more orthodox ruling ‘Communist’ party. In recent years China has shifted closer to the totally repressive social climate of North Korea, where the economy also is under the absolute control of the state. Saudi Arabia has veered futher towards a libertarian economy in recent times, but with no real relaxation of its sweeping authoritarian powers. 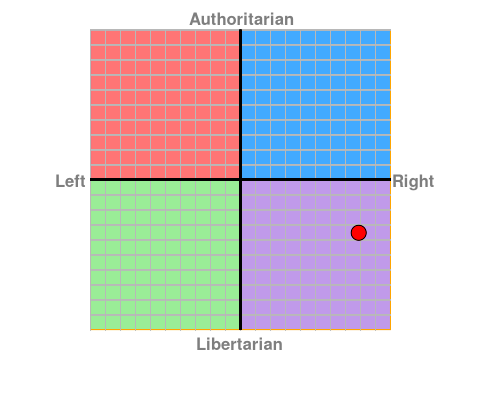 Our caricatures are drawn by New Zealand cartoonist Malcom Evans.

to malcolm@evanscartoons.com. Remember to include your mailing address. If you want your caricature placed in a Political Compass quadrant, indicate which one. Otherwise Malcolm can draw you doing whatever you’d like: graduating, gardening, grilling — or whatever’s uniquely you. You might like a sporting or wedding cartoon, either for yourself or someone else.