In the introduction, we explained the inadequacies of the traditional left-right line.

If we recognise that this is essentially an economic line it’s fine, as far as it goes. We can show, for example, Stalin, Mao Zedong and Pol Pot, with their commitment to a totally controlled economy, on the hard left. Socialists like Mahatma Gandhi and Robert Mugabe would occupy a less extreme leftist position. Margaret Thatcher would be well over to the right, but further right still would be someone like that ultimate free marketeer, General Pinochet.

That deals with economics, but the social dimension is also important in politics. That’s the one that the mere left-right scale doesn’t adequately address. So we’ve added one, ranging in positions from extreme authoritarian to extreme libertarian.

Both an economic dimension and a social dimension are important factors for a proper political analysis. By adding the social dimension you can show that Stalin was an authoritarian leftist (ie the state is more important than the individual) and that Gandhi, believing in the supreme value of each individual, is a liberal leftist. While the former involves state-imposed arbitrary collectivism in the extreme top left, on the extreme bottom left is voluntary collectivism at regional level, with no state involved. Hundreds of such anarchist communities existed in Spain during the civil war period

You can also put Pinochet, who was prepared to sanction mass killing for the sake of the free market, on the far right as well as in a hardcore authoritarian position. On the non-socialist side you can distinguish someone like Milton Friedman, who is anti-state for fiscal rather than social reasons, from Hitler, who wanted to make the state stronger, even if he wiped out half of humanity in the process.

The chart also makes clear that, despite popular perceptions, the opposite of fascism is not communism but anarchism (ie liberal socialism), and that the opposite of communism ( ie an entirely state-planned economy) is neo-liberalism (ie extreme deregulated economy)

The usual understanding of anarchism as a left wing ideology does not take into account the neo-liberal “anarchism” championed by the likes of Ayn Rand, Milton Friedman and America’s Libertarian Party, which couples social Darwinian right-wing economics with liberal positions on most social issues. Often their libertarian impulses stop short of opposition to strong law and order positions, and are more economic in substance (ie no taxes) so they are not as extremely libertarian as they are extremely right wing. On the other hand, the classical libertarian collectivism of anarcho-syndicalism ( libertarian socialism) belongs in the bottom left hand corner.

In our home page we demolished the myth that authoritarianism is necessarily “right wing”, with the examples of Robert Mugabe, Pol Pot and Stalin. Similarly Hitler, on an economic scale, was not an extreme right-winger. His economic policies were broadly Keynesian, and to the left of some of today’s Labour parties. If you could get Hitler and Stalin to sit down together and avoid economics, the two diehard authoritarians would find plenty of common ground.

A Word about Neo-cons and Neo-libs

U.S. neo-conservatives, with their commitment to high military spending and the global assertion of national values, tend to be more authoritarian than hard right. By contrast, neo-liberals, opposed to such moral leadership and, more especially, the ensuing demands on the tax payer, belong to a further right but less authoritarian region. Paradoxically, the “free market”, in neo-con parlance, also allows for the large-scale subsidy of the military-industrial complex, a considerable degree of corporate welfare, and protectionism when deemed in the national interest. These are viewed by neo-libs as impediments to the unfettered market forces that they champion. 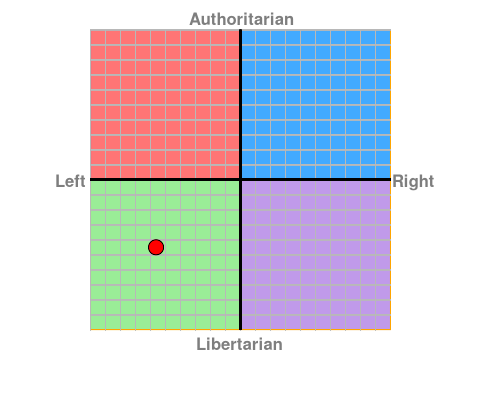 While the caricatures have been placed in the quadrants appropriate to their political views, we have not attempted to place them accurately within their quadrants. Aesthetics took priority over ideology in this instance. So before you write to us to complain that we have Sanders to the left of Mandela, or that Ayn Rand believed in libertarianism only for the élite, consider that the certificate is designed to start conversations, not to settle bets.